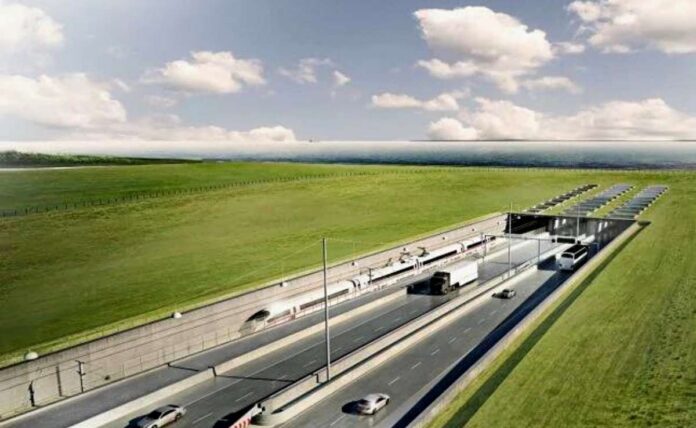 The new Fehmarn Belt fixed link between Germany and Denmark, which spans eighteen kilometers, is slated to be the world’s longest and quickest underwater tunnel.

It will reduce the forty-five-minute ferry ride from Rdbyhavn to Puttgarden to 10 minutes by vehicle and seven minutes by train once it is finished.

Once finished, the tunnel should speed up train travel, improve linkages between Scandinavia and Central Europe, and create a more environmentally friendly traffic lane.

Therefore, the ten billion euro price tag promises to be worthwhile and receives the seal of approval from the Ten-T Programme of the European Commission.

The two two-lane highways, which will be divided by a service corridor and two distinct trains, will make up the underwater fixed-link tunnel.

Even though the Fehmarn Belt Fixed Link Project established the fixed link concept back in 2008, it took another twelve years before the first groundbreaking ceremonies occurred in 2020 in Denmark and then in 2021 in Germany.

Initial site preparation got underway in Holland’s Rodbyhavn and on the island of Fehrman’s Puttgarden. The business also built new channels and access roads in 2021.

In order to establish additional land areas, the business also set out to dredge the Fehmarn Belt and build work harbors. To go along with the “tunnel factory,” as it were, where the components for the Fixed Link project could be created, they also erected a new, so-called tunnel town.

Femern began erecting portal structures on both sides in 2022. In addition, they want to start making the tunnel’s components. The installation is the following step in the process that will hopefully result in testing and a 2029 opening.

Henrik Vincentsen, CEO of Femern A/S, the state-owned Danish corporation in charge of the project, claimed that the first production line is anticipated to be completed by the end of the year or the start of the next year. “By the start of 2024, we must be prepared to submerge the first tunnel element.”

For many businesses trying to counteract the effects of global warming, sustainable construction has become a catchphrase. The future looks bright with companies in the Sierra Nevada, partnerships for environmental education in Panama, and green walls in Africa. The horizon appears to be green.

Long-Term Sustainability In Relation To The Tunnel

The project’s goal is to build a tunnel that will endure for a very long period and be sustainable. However, some detractors disagree that it’s a possibility.

Environmentalists are especially concerned about the harm that building might cause to the seas and the seabeds. They ponder whether the supposed advantages of the tunnel are worthwhile.

Additionally, even initiatives involving extensive building can have an adverse impact on the environment, despite the best intentions of mice and men.

Because of this, some environmentalists have raised concerns over the probable destruction of the EU-protected Fehrman Belt, the German organization NABU. Many people also doubt if the tunnel will eventually conform to the EU’s green standards.

Femern A/S, however, has voiced confidence in the matter and has instead highlighted the “temporary” impact that construction underwater has on the environment.

In an interview with Euronews Next, Vincentsen said that the effort will lead to the establishment of “vast expanses of new nature.” The creation of 300 hectares of coastal wetlands on land and 42 hectares of new reefs at sea, he continued, will take place in addition to the other claims he made.

Vencentsen highlighted the project’s advantages in relation to the impact on CO2 levels and the EU’s green policies.

He claims that the tunnel will greatly cut down on the amount of time, energy, fuel, and CO2 emissions produced by transit traffic. Additionally, it will expand the network’s capacity and reduce traffic on Denmark’s roads and rails.

The Fehmarnbelt Tunnel has been designated a priority project by the European Commission because of this.

How much of the Fehmarnbelt Tunnel is built beneath the Baltic sea?

How long will the train take after Fehmarnbelt Tunnel?

How long will the car take through the Fehmarnbelt Tunnel?

How much time does it take to travel from Denmark to Germany by ferry?